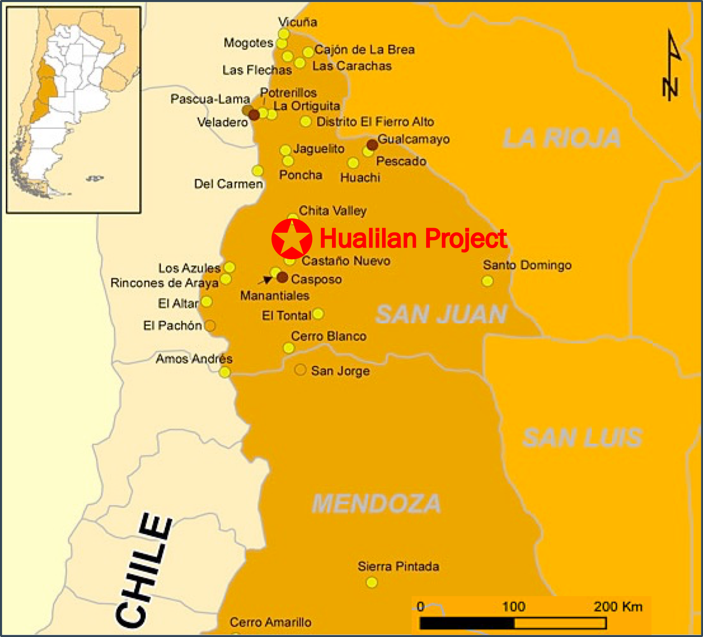 San Juan province is the leading gold producer and the most pro-mining province in Argentine Republic. The geological potential of the province is backed by a proactive Mining Ministry and strong governmental support. In addition to a number of producing gold mines San Juan Province hosts world class copper deposits such as El Pachón (Glencore), Los Azules (McEwen Mining) and El Altar (Stillwater Mining).

The Hualilan Project consists of 15 mining leases and an exploration licence application covering the surrounding 26km2. Hualilan has extensive historical drilling with in excess of 150 drill-holes dating back to the 1970s. The property was last explored by La Mancha Resources, a Toronto Stock Exchange listed company, in 2004. La Mancha’s work resulted in NI43-101 (non-JORC) resource estimate of ~647,000 Oz Au at 12 g/t gold# that remains open in most directions.

The most recent metallurgical work (1999-2000) indicated 80% recoveries of gold and silver via a simple flotation operation plus production of a ~ 50% zinc concentrate stream. 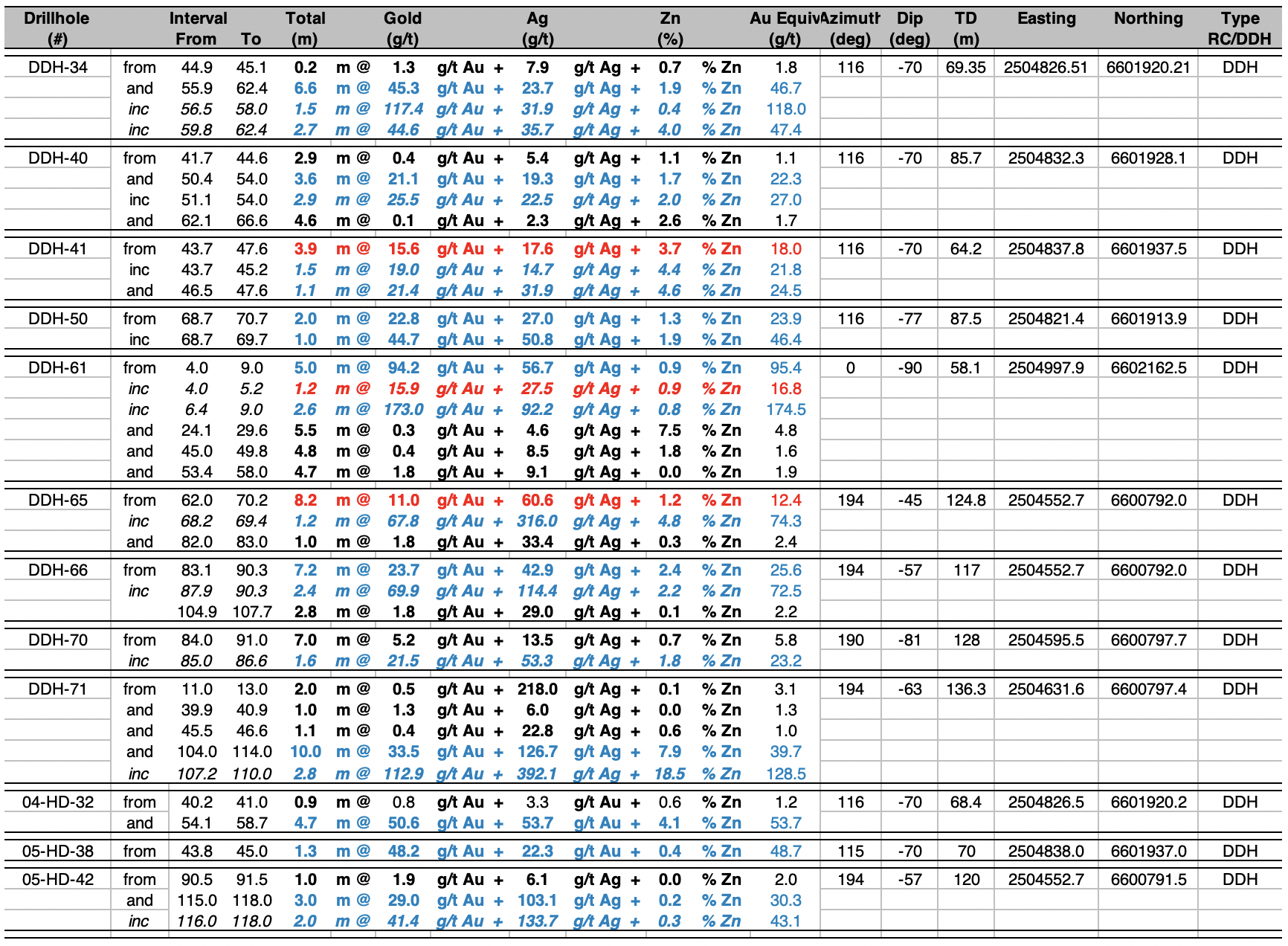 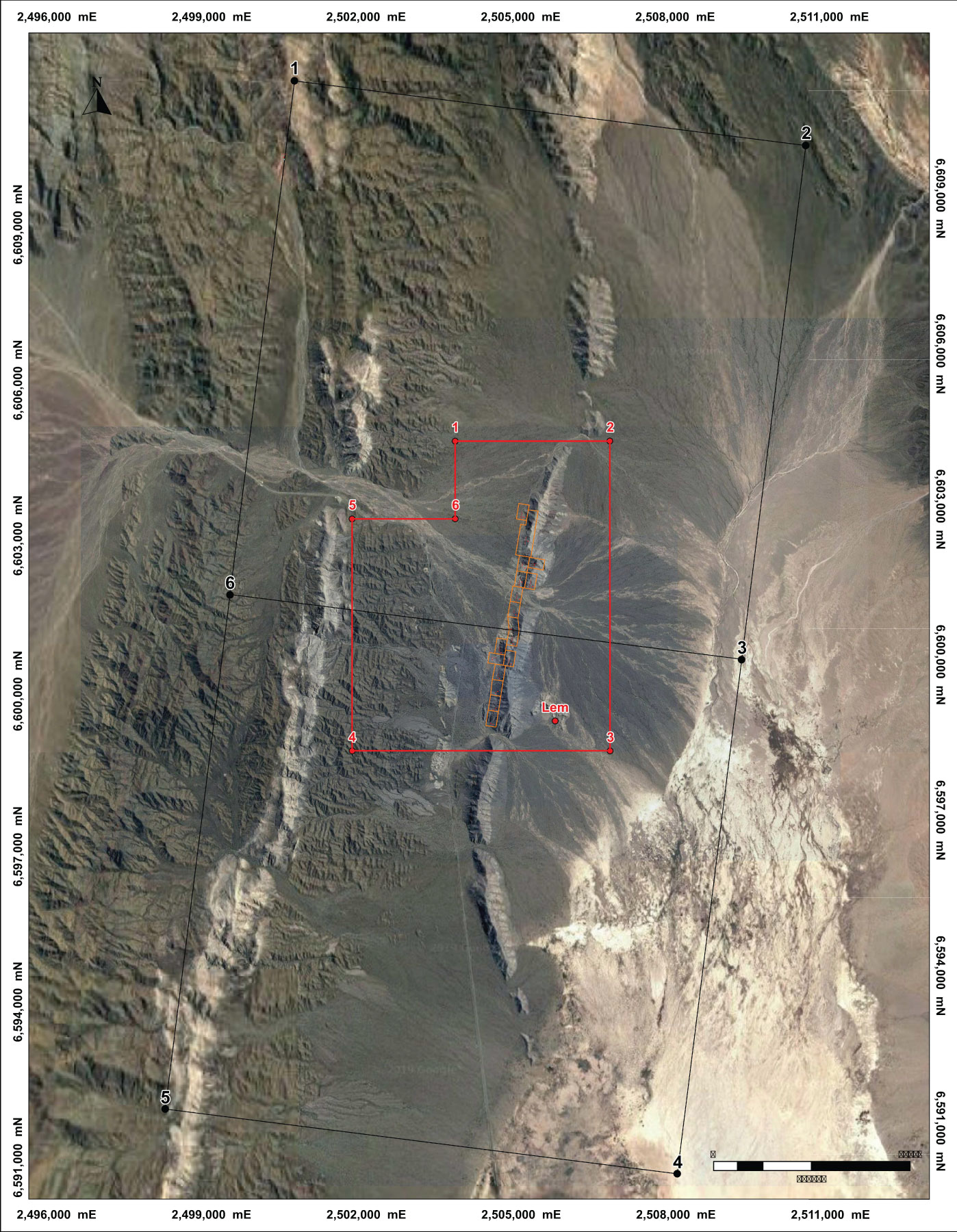 The Hualilan Project is located approximately 120km north-northwest of San Juan, the capital of San Juan Province in north-western Argentina.

Logistics are excellent with the Project accessible via sealed roads to within 500 metres of the licence and then by a series of unsealed roads around the licence.  The closest town on the power grid is approximately 40km to the north of the Hualilan Project.

The project is located at an elevation of approximately 1700m. The climate is moderate and dry with rain most common from December to January.  The area is sparsely populated, vegetation is thin and geology is well exposed at surface.  Field operations are possible year-round.

The host rocks to the known mineralisation are Ordovician limestone and Silurian conglomerate, sandstone and siltstone.  The sedimentary rocks are intruded by mid-Miocene stocks, dykes and sills.

The mineralisation has been identified in a number of vein and manto bodies covering approximately 5km of strike which remain open in most directions. Historical exploration has been limited to areas where the deposit outcrops.

The key historical exploration drilling and sampling results are listed below.

Intermittent sampling dating back over 500 years has produced a great deal of data including sampling data, geologic maps, reports, trenching data, underground workings, drill hole results, geophysical surveys, resource estimates plus property examinations and detailed studies by several geologists although no work has been completed since 2006. 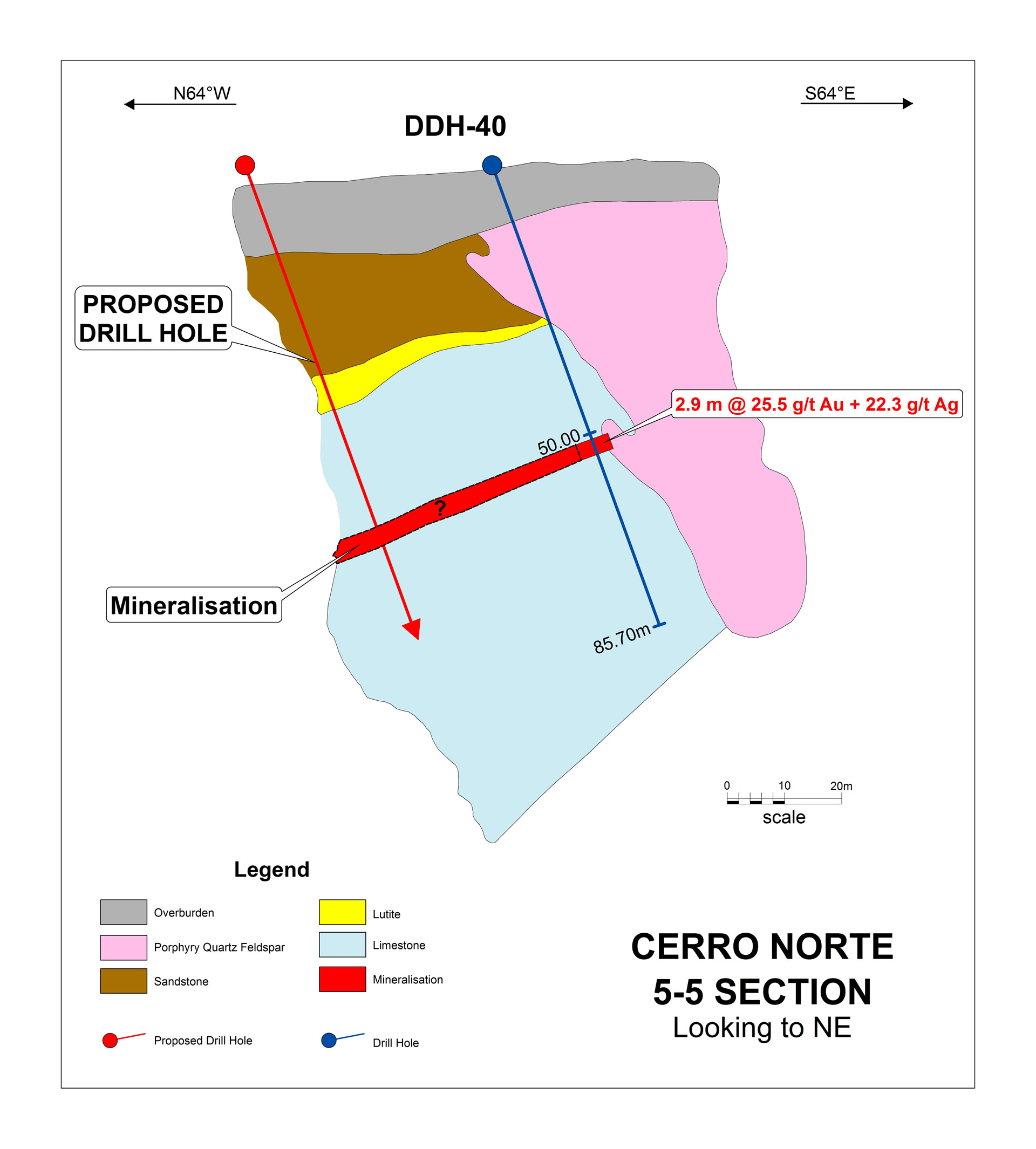 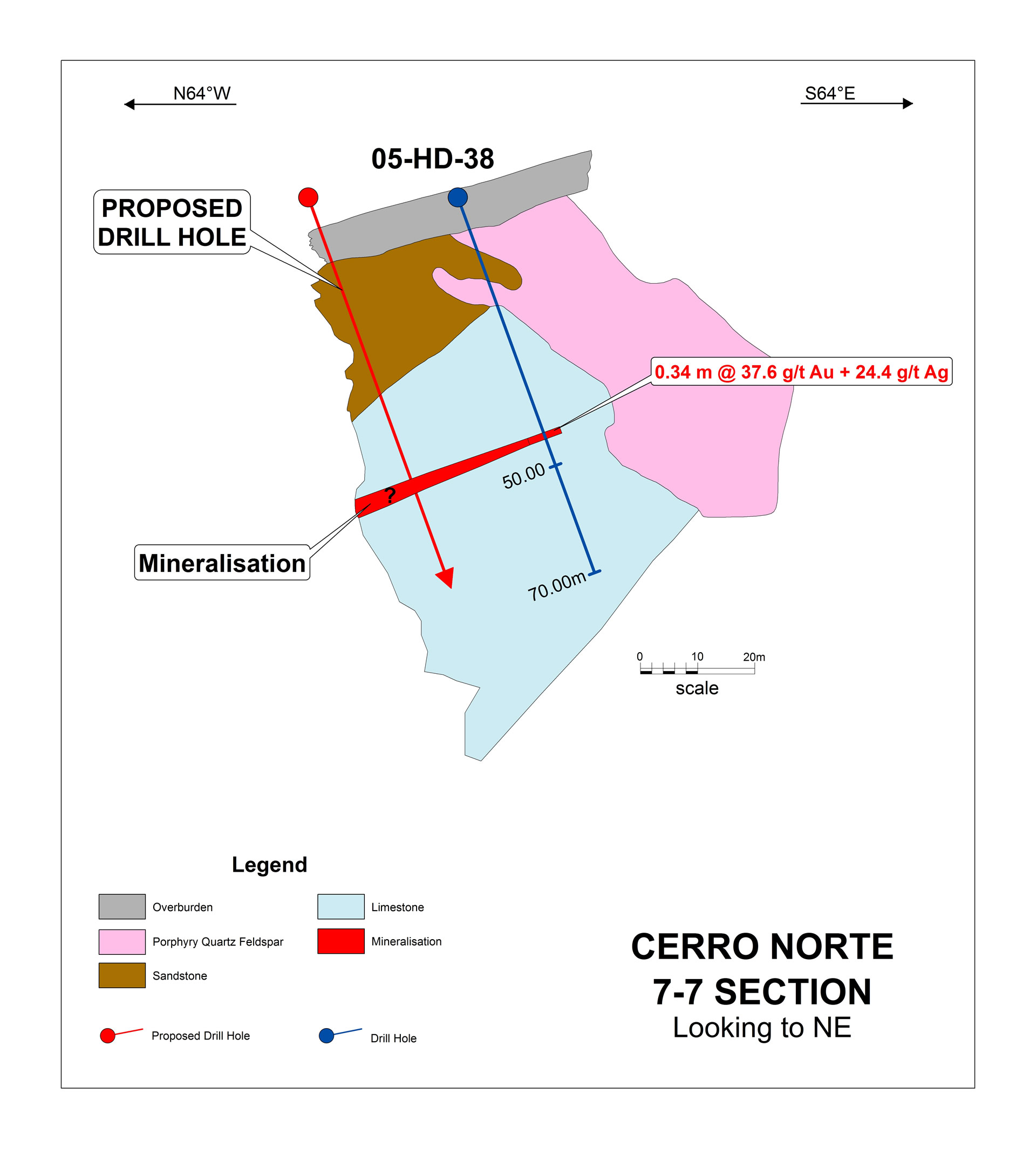 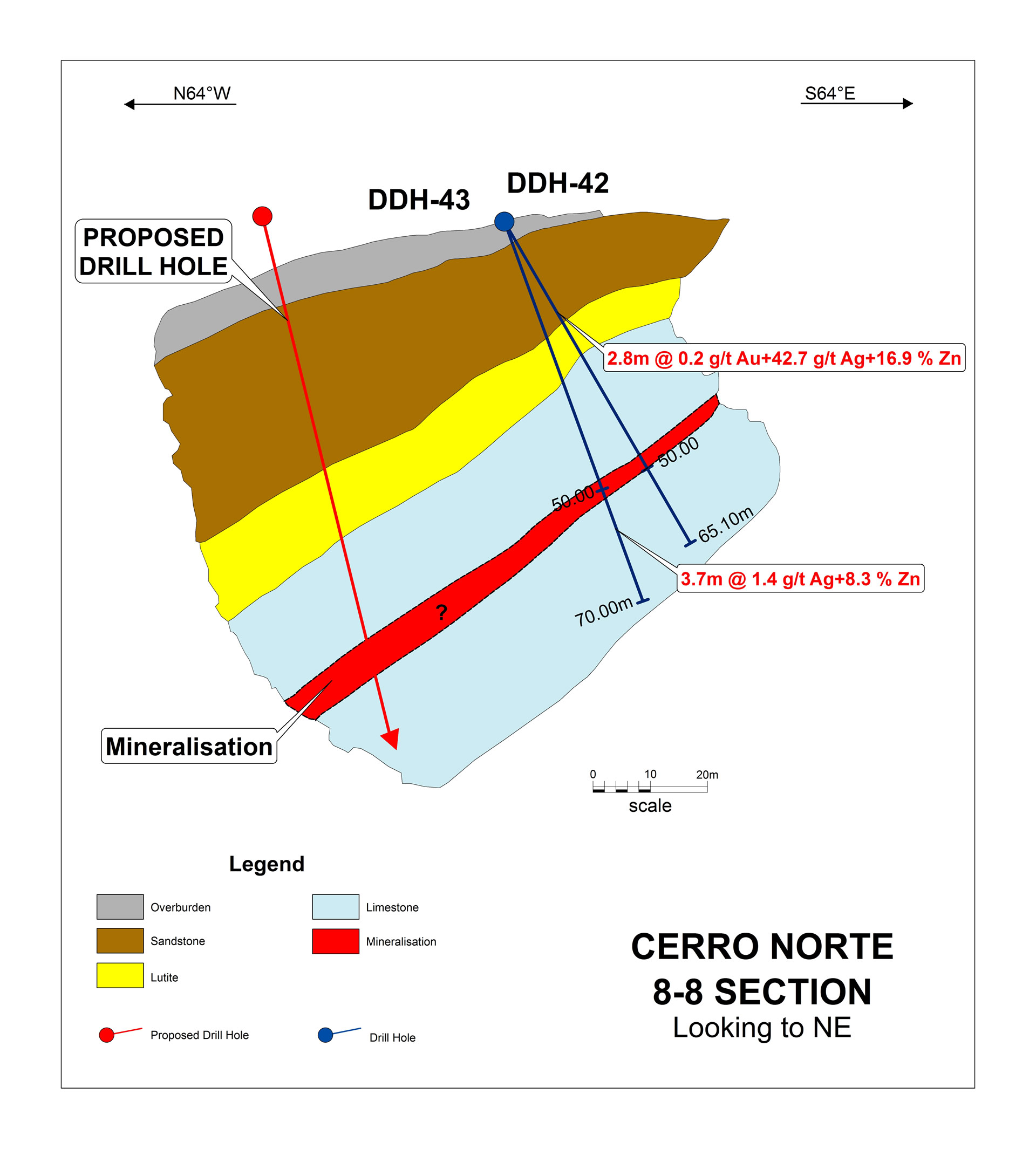 In addition to 188 historical drill holes there is 6km of underground workings that pass through mineralised zones all of which have been mapped and sampled.

Historical drilling results are listed below. Typical intersections are generally:

Mineralisation remains open in most directions and the continuity of mineralization across the property is yet to be tested by systematic drilling. A number of step out opportunities have been identified as illustrated below which will be tested in the initial drilling program.

To verify the foreign estimates CEL in accordance with the JORC Code the Company intends to develop a program to include: 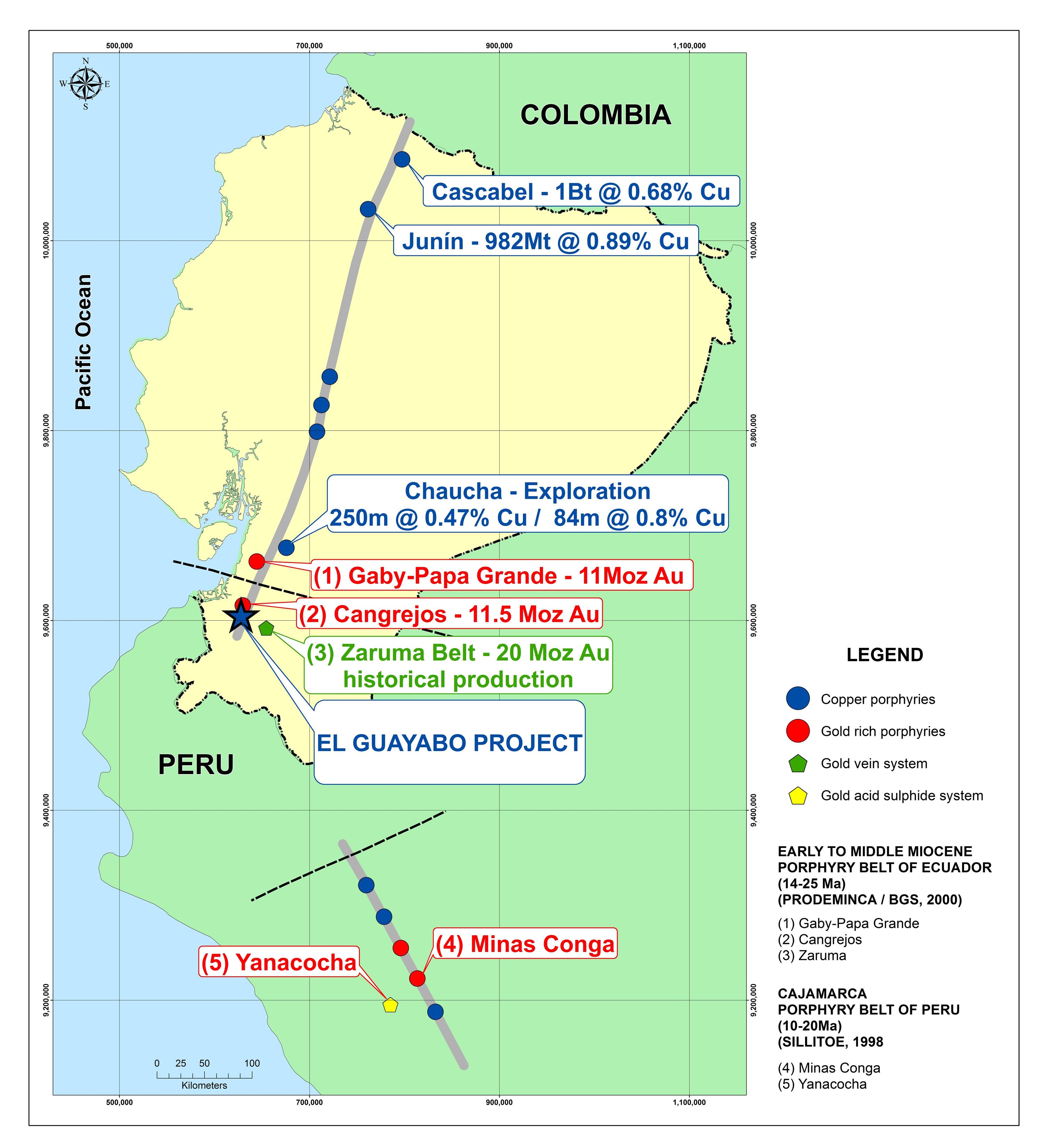 The Andean Copper Belt contains multiple Tier 1copper/gold projects and half the worlds copper resources. Ecuador is emerging as host to world class copper and gold deposits and one of the most prospective and under portions of the Andean Copper Belt.  A number of majors have made significant commitments to invest in Ecuador including BHP, Anglo, FMG, Hancock and Newcrest.

The project consists of nested late Oligocene to Early Miocene intrusions punctured and intruded by a number of breccia pipes and porphyries. Mineralization has been recognized in the breccia bodies, as quartz veins and veinlets which appear structurally controlled, and in the intrusives themselves.

The majority of the 33 historical drill holes intersected significant width of ore grade material including:

The project has multiple targets:

The property is located within the El Oro Province of southern Ecuador, 35 Kilometers south southeast of the Machala (Ecuador´s fourth largest city) which lies on the Pan-American Highway and contains a world class deep water port.

Exploration is uninterrupted all year round with the project located at only 1000m asl. A well-equipped active exploration camp, with a core processing and storage facility, exists at the site.  This facility is capable of housing up to 20 workers and has electricity and phone/internet. 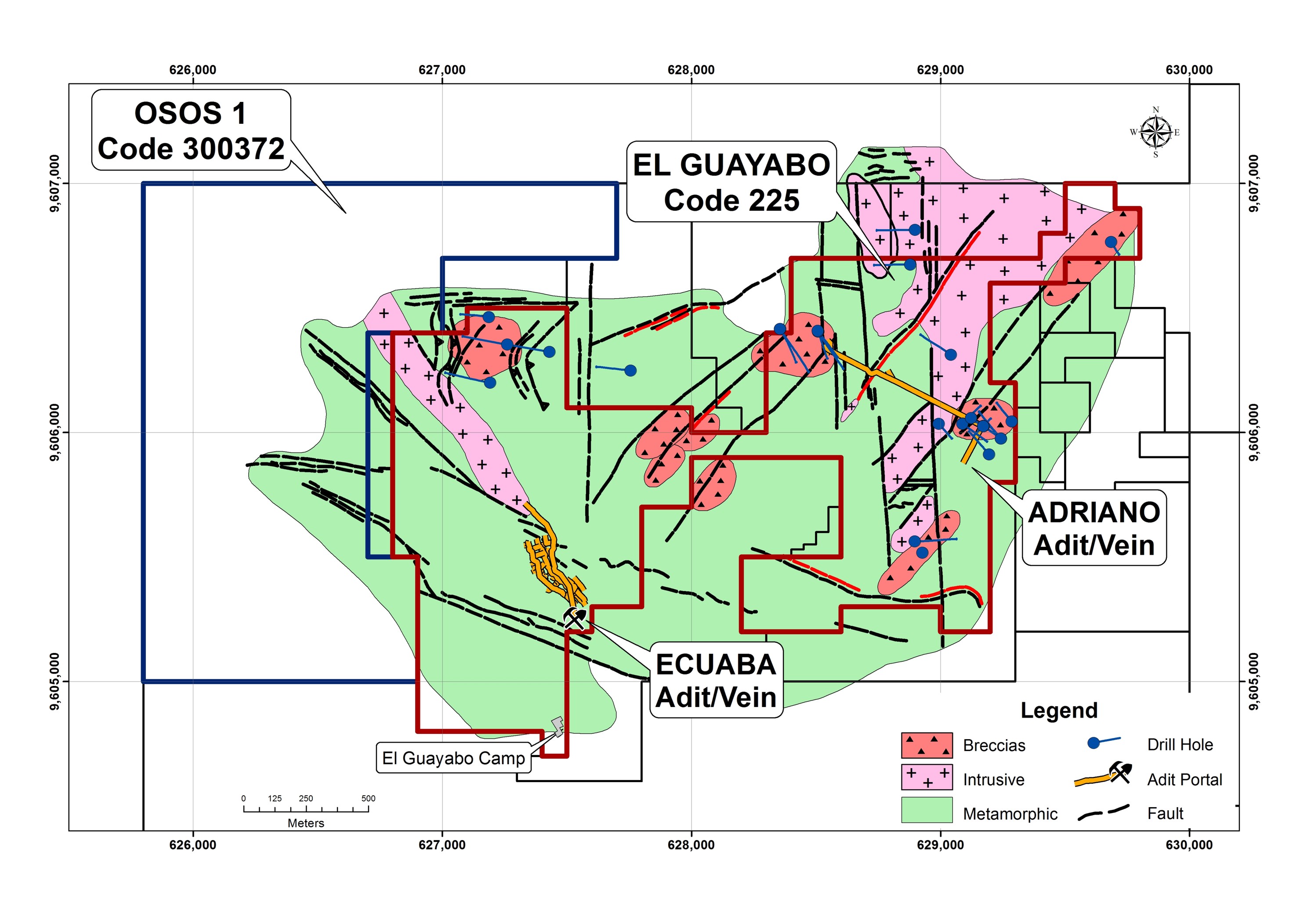 Southern Ecuador is one of the most under-explored sections of the Andean Copper Belt, which extends from Chile in the south to Colombia in the north. This belt hosts some of the world’s largest porphyry copper and gold deposits.

Locally the El Guayabo project consists of a of metamorphic rocks intruded by a series of nested late Oligocene to Early Miocene Alkalic porphyry intrusions. The intrusions range in age from 40 – 10 Ma, suggesting a long-lived intrusive complex as is the case for much of western South America. The intrusions are the same age as those which host the Junin Porphyry copper deposit (982Mt @ 0.89% Cu), and identical in age and composition to those which host the Cangrejos (+10MOz Au) and Gaby (+10MOz Au) Projects some 10km and 40km along strike.

Mineralization has been recognized in:

Favourable conditions to develop high grade mineralization at depth exist such as, development of a sealed system by older metamorphic basement, and amphibolite mafic lithology that could act as a sulphides trap (buffer). This favourable geology has acted as a focus for mineralisation in many know porphyry systems.

Odin Mining and Newmont Mining were active in the Cangrejos – El Guayabo – Osos area beginning in 1992.  From 1994 thru 1996, Odin and Newmont carried out a diamond drill campaign that culminated in 7,605 m of diamond core drilling.  Kinross Gold Corporation was active in the district from 2006 to 2009 under a farmin agreement with Odin. Kinross’ work included geological mapping and soil and rock sampling. With the exception of an airborne magnetic survey over the property in 2000 no geophysics was undertaken.

This historical exploration appears to have been focused almost exclusively for gold targeting surface gold anomalies or the depth extensions of higher grade gold zones being exploited by the artisanal miners.

Historic geochemistry results (> 6000 samples) are representative of a typical porphyry copper zonation. The project presents two Cu-Mo-Pb zones, surrounded by outer halo with Au+Ag+Zn+Sb. This supports the evidence recognized in drill holes, that suggest that the magmatic-hydrothermal breccias are related to a porphyry copper source (Cu±Au±Mo system). 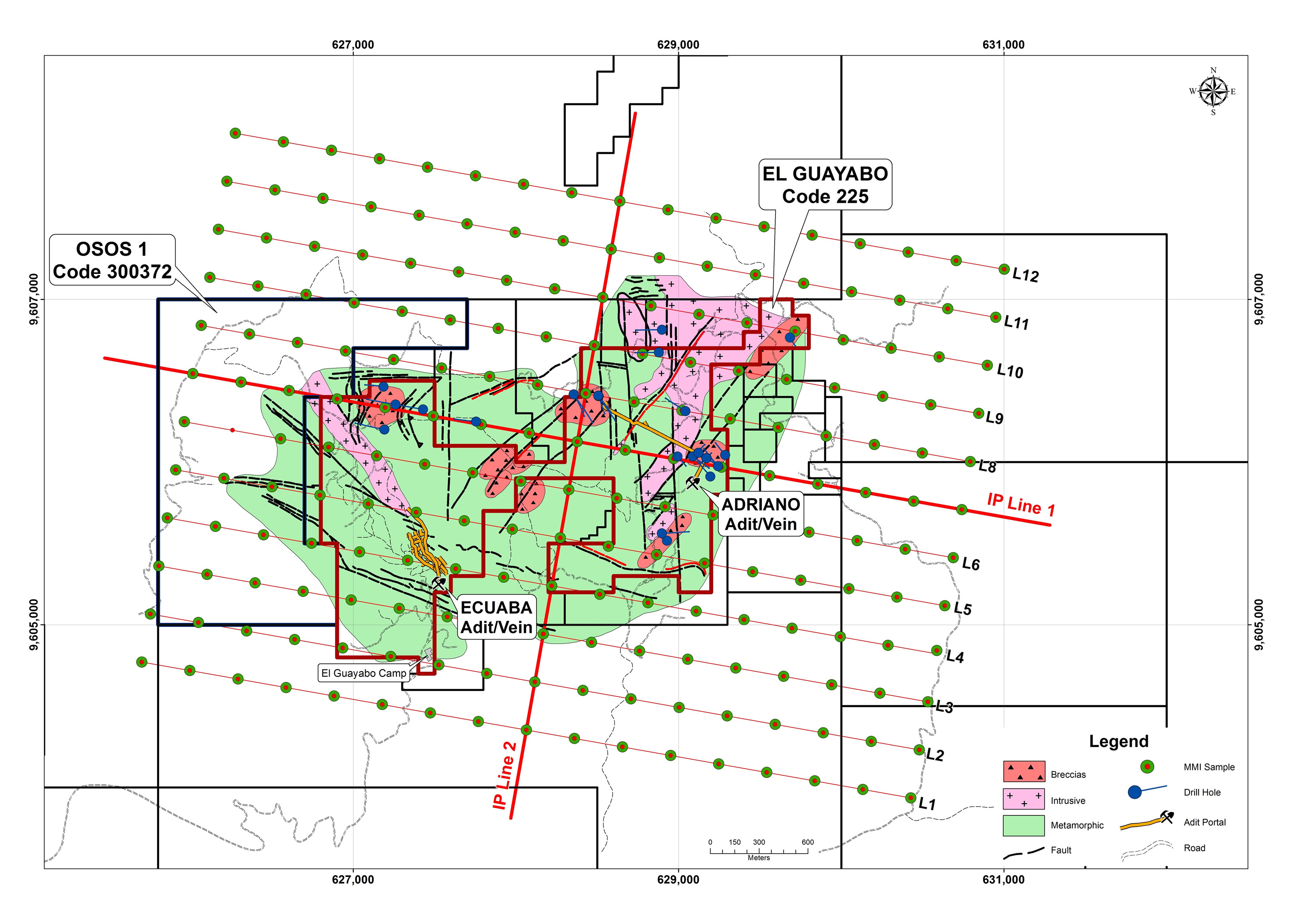 The Historical drilling results are listed in the table below. The assay suite and follow up confirm that exploration appears to have been focused almost exclusively for high grade gold. The initial 5 drill holes were assayed for gold only and never followed or assayed for copper despite returning wide (+100m) intervals of 0.4 g/t Au with visible chalcopyrite logged in the core.

Most holes have a significant intersection suggesting there is considerable potential to extend the known mineralisation. (SRK Consulting- High level review of the El Guayabo and Hualilan projects 27 July 2018).

A review of the historical drilling has indicated that many of the holes terminated prior to target and a number ended in ore grade mineralisation which was never followed-up. Only two of the ten known breccia bodies on the property have been systematically drilled and sampled.

Since gaining control of the project CEL has implemented a program designed to better define targets for drilling. The current program is underway: 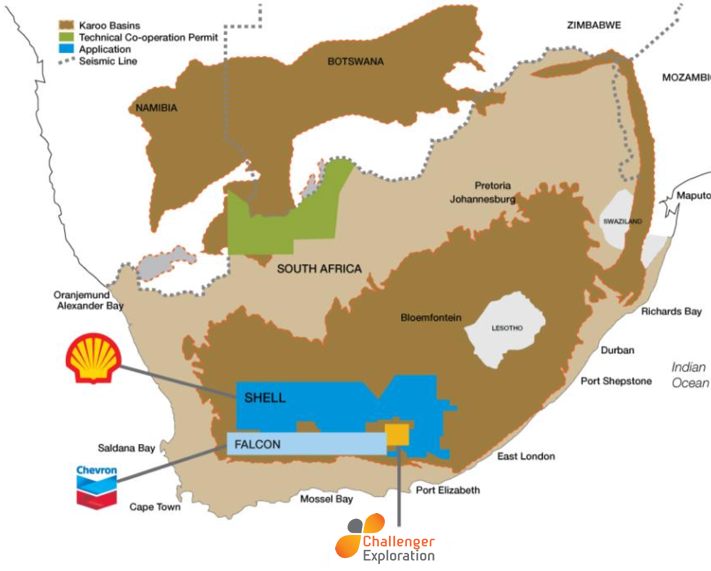 The Karoo Basin, which extends across 600,000km2 is located in central and southern South Africa and contains organic rich shales of Permian age with combined thickness up to 5,000 feet. The focus for shale gas exploration is in the southern portion of the basin where the shales are at sufficient depth and where five wells, all pre-1970, intersected the shales with significant gas shows. One well, the Cranemere CR 1/68 well, flowed more than 8 MMcf/day of natural gas from the Fort Brown shale during testing over a 158 feet interval in 1968. The production was judged to be from fractures and secondary porosity in the shales. As first mover, Challenger’s South African subsidiary, Bundu Gas and Oil Exploration (Pty) Ltd (Bundu), selected its application area of approximately 1 million acres to be centred around this well.

Challengers 95% owned subsidiary Bundu has lodged an application for the Cranemere project, a significant shale gas prospect located in the Eastern Cape Province. The application covers 3,500km2 (870,000 acres) centred on the 1968 discovery well.

The Karoo Basin has become the focus of intense interest in the past few years, following the initial application to explore for shale gas in the basin by Bundu (acquired by Challenger in April 2010) in February 2009. Furthermore, the low economic growth rates and power crisis in South Africa have strongly motivated the government to pursue potential shale gas resources as a catalyst to transform the economy.

Shell and Falcon Oil and Gas are also pursuing exploration rights in the region. Chevron has announced an Agreement with Falcon Oil and Gas Ltd to jointly co-operate on unconventional gas opportunities in the Karoo Basin, with the result that Challenger is the only junior company with interests in the basin, alongside Shell and Chevron. 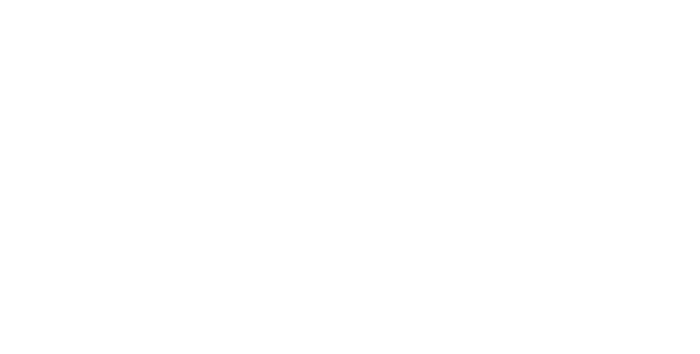 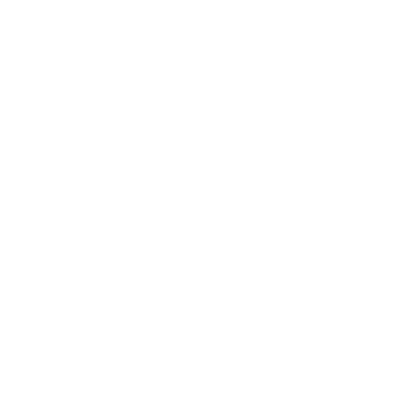